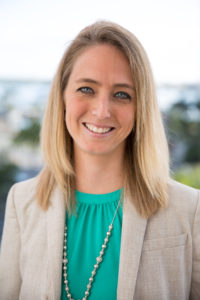 From the Junior League to Humane Societies and Friends of Jupiter Beach, Melinda Barwick has always been avidly involved in her community. She believes strongly in giving back and enjoys using her skill sets to further nonprofits’ goals. During her time in the League, Melinda has served on Deck the Palms, Digital Media Graphics/Branding, Special Events, and the Fund Development Committee.

Melinda Barwick began establishing her professional career as the President of Jupiter High School’s chapter of Future Business Leaders of America, FBLA. With dual degrees in Business Management and Accounting from University of Florida and Florida Atlantic University, she was a Controller at a real estate development company in Colorado before venturing back to Jupiter, FL to take on a finance position at a local construction company.

In 2013, she landed an accounting position at PDQ, a restaurant franchise owned by Tim Gannon, one of the co‐founders of Outback Steakhouse. After working her way up through the ranks at PDQ, she became the company’s Chief Financial Officer. She is now the CFO of Bolay Restaurant Partners, where she lives in the powerful realm between spreadsheets and ambitions. Since becoming CFO, she has unearthed areas of opportunities using her keen ability to create long‐term strategies using out‐of the‐box thinking. She has helped facilitate efficiencies bringing exponential growth to the bottom line.