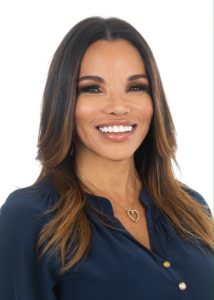 Jennifer Nawrocki joined the Junior League in 2008 in Boca Raton, where she served on the Board as PR Vice President and as a member of the Management Team. Jennifer transferred to JLPB in 2017 and jumped right into service as Chair for the Sustainer Theatre Series and as a  member of the Cotillion Committee. Most recently, Jennifer held the position of  PR Chair.

Professionally, Jennifer began her career in marketing and PR working for the PR entertainment firm PMK where she assisted with press campaigns for the “who’s who” of film, television, and music.  Jennifer soon landed a coveted publicist position with MTV Networks handling PR for programs such as The Real World, Beach MTV, The Jon Stewart Show, and House of Style. A career highlight of Jennifer’s was in her role as Marketing Specialist for the NY based ballet company the Dance Theatre of Harlem. It was there that her marketing efforts for the Company’s South African tour led to a dinner reception and press opportunity with Nelson Mandela. Jennifer currently works as a PR Consultant.

Jennifer attended The Linden Hall School graduating as class Salutatorian and holds a BA Degree in Sociology and a Minor in Legal Studies from Brandeis University in Waltham, MA. Jennifer continues her appreciation of entertainment and the arts as an Executive Board Member of the Young Friends of the Palm Beach Symphony. She is also an active volunteer with several non-profit organizations in the community.

Jennifer and her husband Tony reside in Boca Raton and are parent’s to a six-year-old Standard Poodle named Baron.