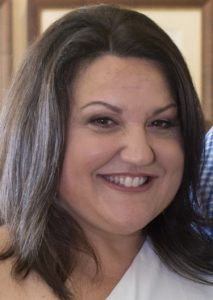 Angela Sarlo-Colio joined the Junior League of the Palm Beaches in 2010. As a native Floridian, Angela wanted to give back to her community in a positive way and found her fulfillment of her personal mission at JLPB.

During her tenure, Angela has served in many different areas of the League such as New Member advisor where she partnered with Christina Jerabek to create the JLPB’s Kids in the Kitchen program. With a love for membership, Angela believed that her leadership track would progress within the Membership Council. However, in 2015, she was asked to join the Fundraising Council and lead the Deck the Palms committee. Alongside her Co-Chair, Elena Peroulakis and their fabulous committee, DTP 2015 raised over seventy-five thousand dollars and brought in 3,000 people in attendance. To date, this would remain Angela’s proudest accomplishments within the League and would propel her to become the Fundraising VP the following year. Angela has a heart for the League that she loves and continues to stay passionate about making JLPB better with each year.

An accomplished Sales Professional, Angela has worked within the sales industry for over 10 years, and is currently employed by LexisNexis Risk Solutions as a Strategic Field Account Manager. Angela’s is a strong communicator, natural born leader and has been a top producer within her industry. She is at her best in front of a client, negotiating opportunities and strategizing with them to align with their long and short term goals.

In her free time, Angela enjoys spending time with her husband, William and Step-Daughter Ana. Angela is a sport enthusiast and loves to support her family’s hometown, The Chicago Cubs and her beloved Florida State Football team. She also enjoys, reading, biking and spending time with friends and family.