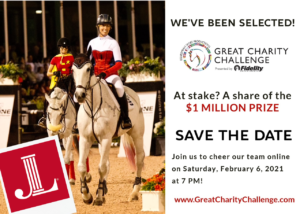 The Junior League of the Palm Beaches is thrilled to have been selected as a participant in the 2021 Great Charity Challenge!

Thank you to our team sponsor Forget Me Not Farm and corporate sponsor Carol & Shelby Bonnie for supporting us during this event! We were thrilled to come in 21st position in the competition and third position for best costume, allowing us to receive a total of $18,000 to benefit our mission.

The Great Charity Challenge presented by Fidelity Investments® has given $14.8 million to 256 Palm Beach County Charities

Founded by father and daughter duo, Mark and Paige Bellissimo in 2009, the Great Charity Challenge presented by Fidelity Investments® (GCC) came forward as a way to increase funding to local non-profits, following the 2008 economic crisis, at a time when donations were scarce.

More about The Great Charity Challenge